With the rapid development and popularization of Internet, IoT (Internet of things), cloud computing and other technologies, the global data has been growing exponentially during the past 20 years. We are embracing the era of big data. And mass data including location information are generated, such as social data, mobile signaling data, navigation trajectory data, urban camera data, wearable terminal data, etc., all of which are streaming data.

Streaming data is characterized by large data volume, diverse sensing types and continuous data changes. In view of these characteristics, SuperMap provides a product and technology proposal for streaming data, which can realize real-time processing and analysis of streaming data, as well as analysis and mining of historical data, so as to obtain more data value.

Spatial filters can filter real-time geographic behavior based on spatial relationships. Steaming Service support spatial relation filtering including contain, disjoint, etc. For example, users can determine whether the current point is in the geofence.

The police officers can be informed of real-time warning information (SMS, E-mail and other forms) to remind to strengthen vigilance when the police car enters the high incidence area, which is set to be a geofence. The background system can also record real-time and detailed information about the relative position of the police car and the geofence, such as entering or leaving.

SuperMap GIS Streaming Service integrates Spark Streaming, a distributed computing framework, to support intelligent Streaming Service’s cluster architecture and dynamic expansion. As is shown in figure5, in the cluster environment (4 node: 16GB, 4-core, 1Gb networks), the entry and exit of civilian aircraft relative to 3,455 geofence was calculated in real time. When processing the same input data, the performance is improved linearly with the increase of nodes. In the same node, the performance does not decrease exponentially as the data increases. 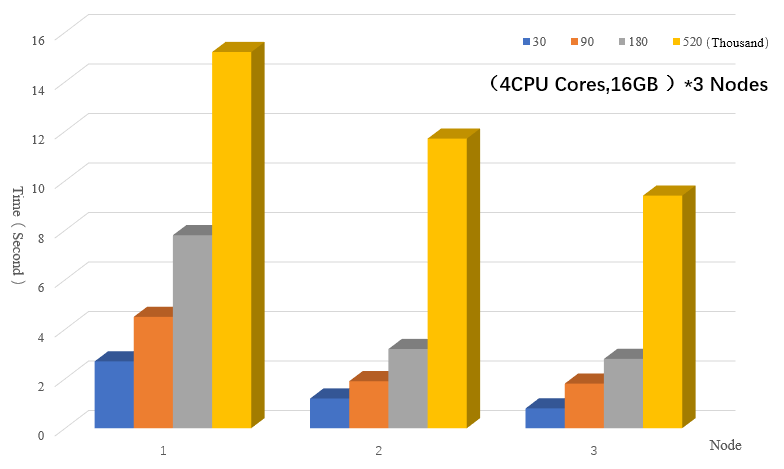 Streaming data is visualized in various SuperMap terminal products, including desktop, mobile, web. iDesktopX supports production of real-time screens. SuperMap iPortal provides a variety of Web Apps such as MapDashboard，DataInsights and DataViz. They supports streaming data display, which can display maps in real time and make thematic maps, as well as provide a variety of statistical charts for large screen display. 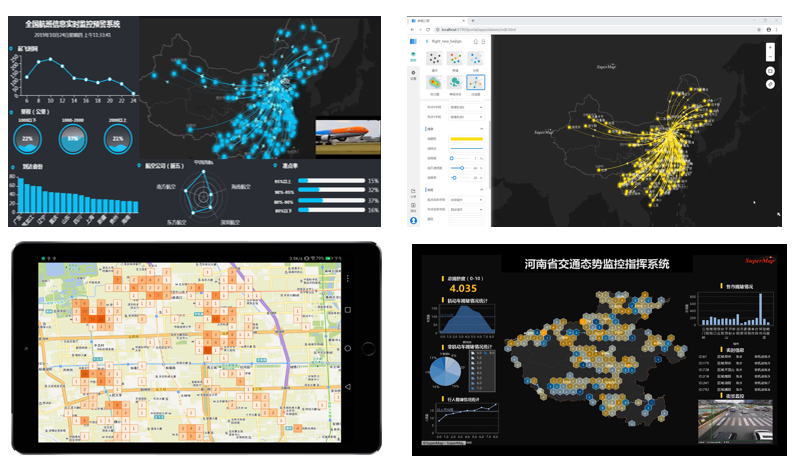 As is shown in figure, SuperMap displays the position and status of the current target at a certain moment in real time. SuperMap also supports the real-time visualization of the result, which comes from distributed analysis of streaming data (such as heat distribution). 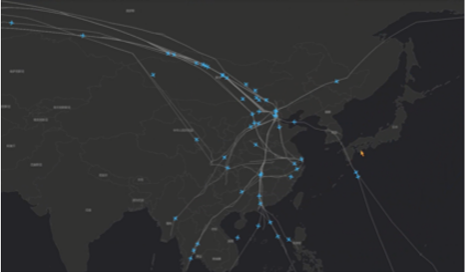 SuperMap displays the streaming data by the time series via processing and analyzing the historical streaming data, such as Reconstruct Tracks. 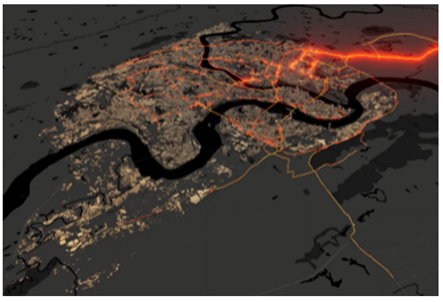 In a ship big data project, user’s requirements include: 1) Maintaining real-time location data storage and spatial visualization of 2.8 million ships per day; 2) Realizing efficient storage and custom query of the existing data, which includes 10 billion records; 3) Segmenting ship data (about 1.6 billion) in half a year by day or hour, and reconstructing tracks within the time range.

In response to the above requirements, SuperMap provides a solution based on streaming data storage technology, streaming data calculation technology and streaming data visualization technology, realizing real-time monitoring of ship data, Reconstruct Tracks and other functions. The project has completed the construction of two application systems (online data analysis system, general data query system) and a resource database (ship database). The project supports the storage management and distributed analysis of user’s data based on SuperMap SDX+ and SuperMap iObjects Java for Spark. Meanwhile, it provides users with ship situation extraction, anomaly mining and other functions in the form of service (SuperMap iServer). Finally, relevant applications are provided to users through the Web and mobile. 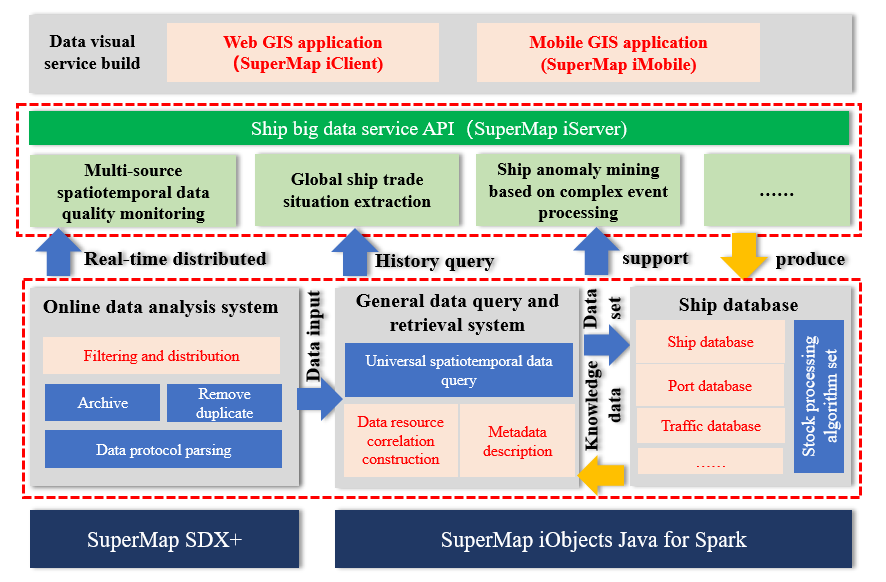 Typical functions provided by the project:

The ship system sends real-time information through Socket and the system accesses the data through Streaming Service. After some data processing, the streaming data accesses to Dataflow Service sending data to SuperMap iClient. And the StreamLayer of SuperMap iClient realizes the visualization of streaming data, real-time monitoring and other related functions. At present, the real-time loading and query of 2.8 million ships are realized and the response time is less than 1 second. 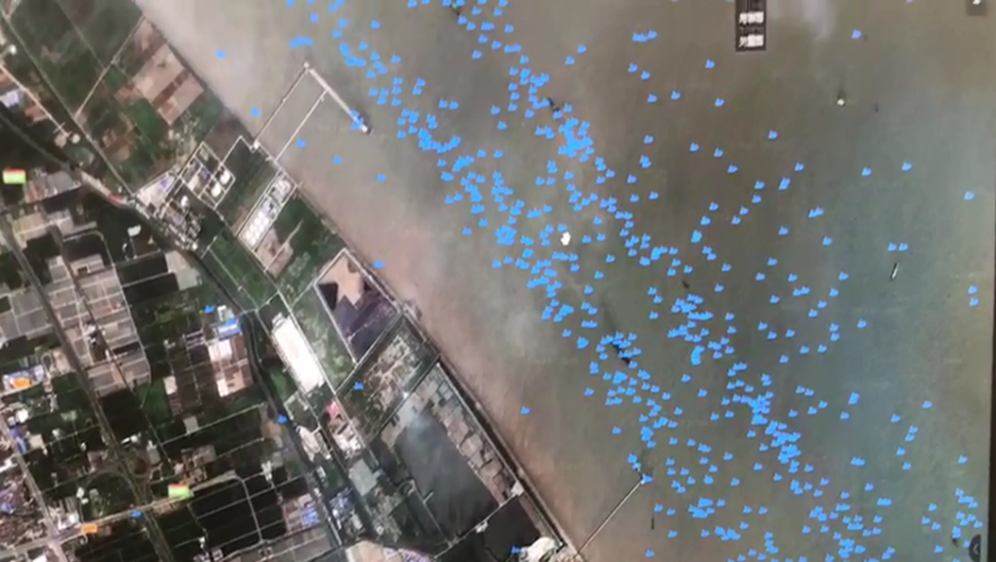 Reconstruct Tracks is reconstructing the trajectory line based on the time information. In this project, the ship’s track was playbacked of multiple periods in the custom area according to the historical data. At the same time, the segmentation distance and the segmentation time can be set to segment the track. 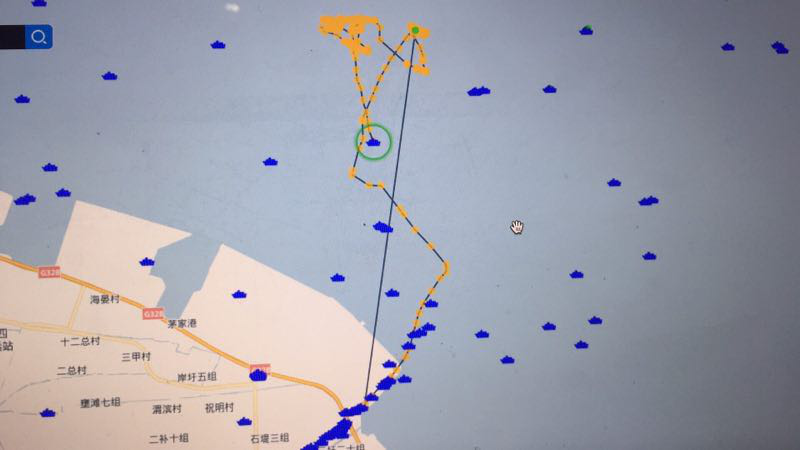 According to the statistics and analysis of the historical ship data, the key regions in global shipping, including the wharf, anchorage area, no-sail area and waterway, are rapidly calculated and analyzed. At the same time, the global ship traffic density was calculated come from the historical data of Automatic Identification System (AIS).And the reception quality or blind area of AIS was evaluated, which providing a basis for the supplement and transmission optimization of AIS base stations. 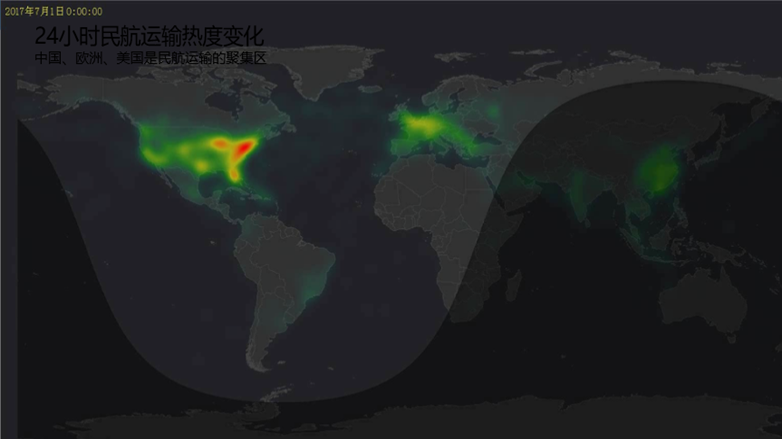